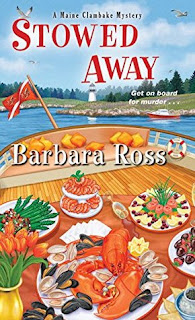 It’s June in Busman’s Harbor, Maine, and Julia Snowden and her family are working hard to get their authentic Maine clambake business ready for summer. Preparations must be put on hold, however, when a mysterious yacht drops anchor in the harbor—and delivers an unexpected dose of murder . . .When Julia’s old prep school rival Wyatt Jayne invites her to dinner on board her billionaire fiancé’s decked-out yacht, Julia arrives to find a sumptuous table set for two—and the yachtsman dead in his chair. Suspicion quickly falls on Wyatt, and Julia’s quest to dredge up the truth leads her into the murky private world of a mega-rich recluse who may not have been all that he seemed . . .

I'm such a fan of the Maine Clambake Mystery series, and this book (the sixth in the series) did not disappoint. The story starts with Julia and her family--characters that are such a joy to visit with every book--deciding if they'll renovate or restore the family home on Morrow Island, all while preparing for the clambake season.

Old school 'friend' Wyatt is there to help with the renovation assessment, along with her wealthy, reclusive boyfriend who is nearby on his yacht. It takes a while before there is a crime, but it's clear later that there were a lot of characters to introduce and clues to plant. There something of a twist at the end which I saw coming, but Ross still pulls it off. This felt very much like an Agatha Christie mystery to me, which is a big compliment.

Great mystery, and this sixth book shows how a cozy mystery doesn't have to be repetitive. Barbara Ross has to be one of my favorite cozy mystery authors: she keeps the story and characters intelligent, but manages to create that cozy context readers come back for.

If you're not familiar with the series, I highly recommend starting with the first book, Clammed Up.

It’s summer! Well, almost anyway. Here in Colorado, the weather is nice enough to make me think I can plant a tree, so that counts as su...

I'm Fleur Bradley, Colorado author of mysteries for kids and t(w)eens. Look for MIDNIGHT AT THE BARCLAY HOTEL (Viking Children's), my new middle-grade (spooky) mystery in Aug. 2020..! Other books include the Double Vision trilogy (Harper Childrens), and my short story The Perfect Alibi will be included in the forthcoming MG Mystery Writers of America anthology (June 2020).