Thursday Thriller Review: Before She Knew Him by Peter Swanson 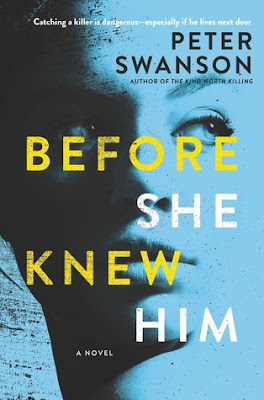 
Catching a killer is dangerous—especially if he lives next door


From the hugely talented author of The Kind Worth Killing comes an exquisitely chilling tale of a young suburban wife with a history of psychological instability whose fears about her new neighbor could lead them both to murder . . .


Hen and her husband Lloyd have settled into a quiet life in a new house outside of Boston, Massachusetts. Hen (short for Henrietta) is an illustrator and works out of a studio nearby, and has found the right meds to control her bipolar disorder. Finally, she’s found some stability and peace.


But when they meet the neighbors next door, that calm begins to erode as she spots a familiar object displayed on the husband’s office shelf. The sports trophy looks exactly like one that went missing from the home of a young man who was killed two years ago. Hen knows because she’s long had a fascination with this unsolved murder—an obsession she doesn’t talk about anymore, but can’t fully shake either.


Could her neighbor, Matthew, be a killer? Or is this the beginning of another psychotic episode like the one she suffered back in college, when she became so consumed with proving a fellow student guilty that she ended up hurting a classmate?


The more Hen observes Matthew, the more she suspects he’s planning something truly terrifying. Yet no one will believe her. Then one night, when she comes face to face with Matthew in a dark parking lot, she realizes that he knows she’s been watching him, that she’s really on to him. And that this is the beginning of a horrifying nightmare she may not live to escape. . .


Excellent stand-alone thriller. The perfect example of great use of perspective changes, and using suspense to create this slow burn that made me stay up well past my bedtime to read.


I kind of saw the twist coming, but still, it was well done. Also, the mental health angle was well-executed--not always the case when it comes to the portrayal of bipolar disorder.


Great book, I recommend it to anyone who wants a smart stand-alone thriller.


**ARC provided by publisher for review**

Talking Page-Turners, (or: How To Add Suspense To Your Writing)

Popping in from my winter (and writing) hibernation for a moment to tell you about a class I'm teaching over at Savvy Authors on how to add suspense to your writing. Find out more here. This is one of my favorite classes to teach, since it always makes me think of the great page-turners I've read recently.

Two Can Keep a Secret by Karen M. McManus is great (I'm reading it now, it's a YA).
Perspective shifts seem to be trendy now; not a favorite device for me, but this one is a real page turner that I can picture making a great movie.

Check it out if you get a chance.

In middle-grade, I just read The Truth As Told By Mason Buttle by Leslie Connor.

This one is suspenseful mostly because you're waiting for Mason to figure out what happened to his best friend (whom he found dead). This book won some awards--more a literary middle-grade than a suspense, but a page-turner all the same.

How about you? Read any page-turners lately?

Email ThisBlogThis!Share to TwitterShare to FacebookShare to Pinterest
Labels: How To Add Suspense To Your Writing, How To Write A Mystery, Page Turners, Savvy Author
Newer Posts Older Posts Home
Subscribe to: Posts (Atom)