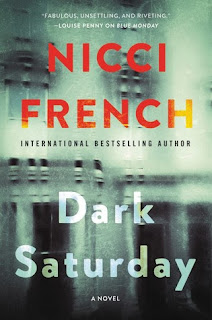 Dark Saturday by Nicci French
William Morrow, Publication: July 11th, 2017
From the publisher:
Thirteen years ago eighteen year old Hannah Docherty was arrested for the brutal murder of her family. It was an open and shut case and Hannah's been incarcerated in a secure hospital ever since.

When psychotherapist Frieda Klein is asked to meet Hannah and give her assessment of her she reluctantly agrees. What she finds horrifies her. Hannah has become a tragic figure, old before her time. And Frieda is haunted by the thought that Hannah might be as much of a victim as her family; that something wasn't right all those years ago.

And as Hannah's case takes hold of her, Frieda soon begins to realize that she's up against someone who'll go to any lengths to protect themselves . . .


My thoughts:
I've followed Nicci French since the very beginning; this husband and wife writer team's is always on my to-read list, no matter the title. I will admit that Frieda Klein, the lead character in this day-of-the-week series, is a bit difficult to like at times, but overall the series is strong, atmospheric in its London setting, and generally a good mystery series to read.


Dark Saturday may be the better of the Frieda Klein books, in my opinion. The mystery driving the story is really one of character: is Hannah Docherty the killer everyone things she is? How much is her captivity in a (rather brutal) mental hospital shaping the monster she is depicted to be? Frieda Klein quickly becomes the woman's champion, which drives the story, and her investigation of the murder of Hannah's family.


Though the solution is a bit far-fetched, I loved this book all the same, because of Frieda's character. Recommended--read this series from the beginning.

Getting my gardening on in June

I’ve been so busy editing the first draft of my crime novel-in-progress (working title: 39), tempus fugit so much that the trees are green and the flowers are blooming here in Colorado. Which means it’s time to pull weeds and get back to gardening, always fun. Pictures coming soon...
I'll probably be editing some more this summer, plus, I've been dusting off an old YA manuscript I'd given up on--and I still have plans to write a middle-grade. I'll keep you posted on if I'll actually be able to pull it all off :-)


I’ve been reading up a storm the past few months, with a trip to Europe and cold weather as a good incentive. I’ve been plucking titles off newsletters and other recommendations, sometimes reading just a little more out of the box—and being pleasantly surprised. I recommend Kate White's The Secrets You Keep, in case you need some summer reading.


David Tennant is my favorite Doctor (Who), and I loved Broadchurch, so I was happy to discover The Escape Artist. So far, it’s kind of terrifying and dark; looking forward to binge-watching the rest of this mini-series.


Until then, I’m going to spend the summer editing, writing a few short stories, and planting some trees.


How about you?? Any good summer plans?