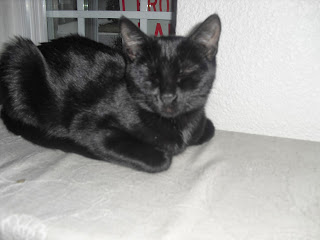 Here's our black kitty, napping before the busy evening. Have a great one, all...
at October 31, 2013 No comments:

Email ThisBlogThis!Share to TwitterShare to FacebookShare to Pinterest
Labels: Blogging About My Cats Even When It's Against The Rules, halloween 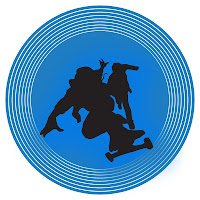 I hope you're all able to follow along with the blog tour--I've had lots of fun with these interviews...

And then there are still some giveaways open! I've listed the full tour below, with the end date to each of the giveaways. I owe a big thanks to Harper Children's for graciously donating a set of both books to the winners.

Oct. 7: Criminal Element is giving away a Top-Secret Spy Kit for kids, including the first and second book in the Double Vision series. **giveaway closed**

Oct. 15: Launch day! Look for an interview at Sleuths, Spies and Alibis plus another GIVEAWAY of books… Also, virtual cake and lemonade is on me. **giveaway closed**

Oct. 28: An interview at Caroline Starr Rose’s blog feature,Curriculum Connections—find out how Code Name 711 can be used in the classroom! Plus, a GIVEAWAY… **ends Oct. 31**

It's Monday! What are you reading? 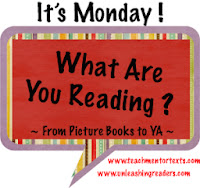 This is one of those fun things that some blogs participate in, and I thought I'd share my reading adventures today.

For some reason, I got to thinking about The Accidental Tourist by Anne Tyler, so I picked it up at my library to re-read. It's still good, I'm glad to say. Below is my kitten Chloe, ready for me to snuggle up with the book. I usually read a kids book at the same time; my MG read is Rick Riordan's House of Hades. Will let you know how that one stacks up. 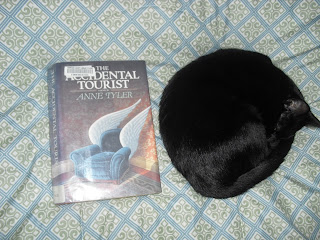 Next up, I'll read the Criminal Element short story collection The Malfeasance Occasional: Girl Trouble. There are lots of good authors in there, so I'm looking forward to it. Also, I plan to read Jay Asher's Thirteen Reasons Why.

What are you reading???

P.S. If you know a teacher, pass on this link to Caroline Starr Rose's blog, where I talk about using Code Name 711 with Revolutionary War Curriculum. There's a double giveaway, too...

Gulf Coast friends: hope to see you in Gulfport this weekend!

I'm continuing my blog tour today at Pragmatic Mom's blog: there's an interview where I give tips on pacing for writers, and I explain how the president in Double Vision: Code Name 711 got to be a woman. Stop by, and enter to win books and spy gadgets! Spy stuff is cool.

And I'm signing in Gulfport at the B&N this Saturday. Come say howdy if you're there... I'm bringing stickers, and love to meet new people. 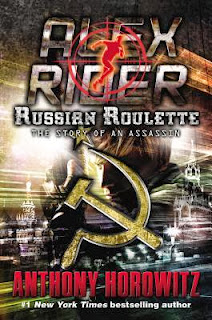 Alex Rider is actually the end of the story.
Yassen Gregorovich was the beginning.
Alex Rider’s life changed forever with one bullet and the pull of a trigger.

It was the cold-blooded contract killer Yassen Gregorovich who changed Alex Rider's life. Aged just fourteen, Alex was thrust into the chaos of international espionage—the world’s only teenage spy. The two have been mortal enemies since.

Yet, as a boy, Yassen was mentored by someone very much like Alex. What turned him into such a ruthless assassin? In some ways, Alex and Yassen are mirror images of each other. One chose to be a hero. The other chose evil.

This is Yassen’s story. A journey down a darkened path.

This was an excellent book. Although Alex Rider wasn't much more than a footnote in this one, it was great (and unusual) to watch the birth of an assassin. I think I held my breath for the first third of the book, as Yassen tries to escape his doomed Russian village.

Things slowed a bit later in the book as he was held captive, but overall, the story held my interest, big time. I had a bit of an issue with a spider plot point in the end--I won't spoil the story for you, but if you catch what I'm talking about, let me know. Still, loved this, and think I'll re-read it at some point, it was that well-written. As an aside, I'm glad Horowitz took the risk to tell Yassen's story. It's a great stand-alone novel.

For parents, teachers, and librarians: there's some underage drinking, in case you're considering this for your middle-grade readers--though in context of Russian culture, it fit the story.

Where I found out about this book:

I'm an Anthony Horowitz fan, so when I heard this book was coming out, I pre-ordered it. Glad I did.

Some music to kick off your week: Imagine Dragons

This song came on the radio, and the whole family liked it (which is unusual). So I thought I'd share.

Oh, and don't forget to follow the Code Name 711 blog tour! There are lots of book giveaways; today, the amazing Erik at This Kid Reviews Books gives his review of Linc's second adventure...

Hope you have an awesome week!

It's my birthday today! Also, it's my book birthday for Code Name 711, and Double Vision launches in paperback today. That's, like, a triple birthday.

This calls for cake... 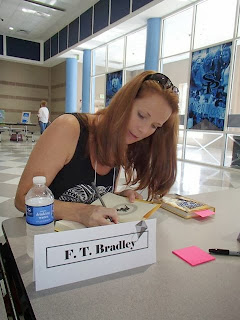 I had my fun over the weekend at the SCBWI Southern Breeze Wik conference in Birmingham (there were other people providing food and cake, pretty awesome). I got inspired, learned more stuff about the seriousness of Alabama college football (dude...), and caught up with good friends. This picture was taken by Jo Kittinger (I forgot to take pics, once again...)

So this is a great week for me. And the fun doesn't end: the Code Name 711 Blog Tour is in full swing--check out the tour stops below! There will be virtual cake, interviews, reviews, and BOOK GIVEAWAYS (those must go in all-caps, of course).

Have a great day, YA Sleutheri. The cake is on me...

Oct. 7: Criminal Element is giving away a Top-Secret Spy Kit for kids, including the first and second book in the Double Vision series.

Oct. 15: Launch day! Look for an interview at Sleuths, Spies and Alibis plus another GIVEAWAY of books… Also, virtual cake and lemonade is on me.

Oct. 16, 17: Buried in Books reviews Double Vision, plus another GIVEAWAY:

Oct. 25: The ever amazing in-the-know Pragmatic Mom reviews Code Name 711, plus another GIVEAWAY:

Oct. 28: An interview at Caroline Starr Rose’s blog feature,Curriculum Connections—find out how Code Name 711 can be used in the classroom! Plus, a GIVEAWAY…

Oct 29: Another amazing librarian, YA Booknerd, reviews Code Name 711.. Plus, a GIVEAWAY…

A little plug for the Cybils 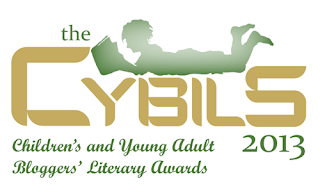 While I'm on the road to Birmingham, I thought I would make a little plug for the Children's and Young Adult Bloggers' Literary Awards--better known as the Cybils. For those of you who read MG and YA, you can nominate your favorite title (it's super-easy) right here.

This is no plug for my books, by the way :-) I just see a lot of great MG and YA titles go unnoticed, so this is the time to share your love for your favorite book! I know I'll be making some suggestions...

You have until Oct. 15, so hurry with those nominations...

Email ThisBlogThis!Share to TwitterShare to FacebookShare to Pinterest
Labels: Cybils, nominate your favorite MG and YA books

Hope to see you in Birmingham! 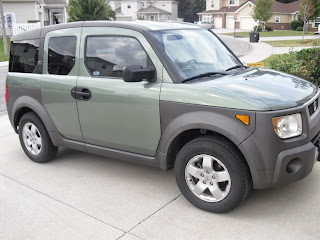 I'm off to Alabama today for the Southern Breeze conference. It'll be great to see some old friends, and make a few new ones.

So if you see this little Honda Element with me rocking out in the driver's seat (probably to some Mumford&Sons or Aretha Franklin...), be sure to wave!

Announcing the Code Name 711 blog tour (with lots of giveaways...) 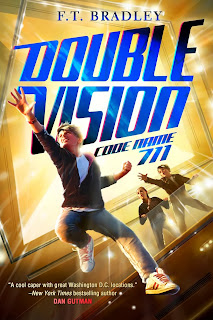 I'm so excited that Double Vision: Code Name 711 is coming out next week...!

To share my excitement, I called on a bunch of blogger friends to help me get the word out about Linc's second adventure. And the kind people at Harper Children's have graciously donated a stack of copies of both Double Vision (Linc's first adventure), and the new Double Vision: Code Name 711 for a double-powered giveaway.

So check out these blogs, and follow me as I make stops to talk about Linc, Culper spies, and how cool George Washington is (he really is, you know). And as always: thank you all, my faithful readers, for helping me make some noise. It's appreciated more than you know.

Oct. 7: Criminal Element is giving away a Top-Secret Spy Kit for kids, including the first and second book in the Double Vision series.

Oct. 15: Launch day! Look for an interview at Sleuths, Spies and Alibis plus another GIVEAWAY of books… Also, virtual cake and lemonade is on me.

Oct. 25: The ever amazing in-the-know Pragmatic Mom reviews Code Name 711, plus another GIVEAWAY:

Oct. 28: An interview at Caroline Starr Rose’s blog feature,Curriculum Connections—find out how Code Name 711 can be used in the classroom! Plus, a GIVEAWAY…

Oct 29: Another amazing librarian, YA Booknerd, reviews Code Name 711... Plus, a GIVEAWAY


And in case you missed it, here's the book trailer:

It's just about that time of year where I get into my trusted little Honda Element (affectionately know as Kermit, as he's green and reliable) and hit the road for book launch related events. This stuff is fun and exciting. Around the South for this tour, there are new and old friends to meet, which is my favorite thing to do.

But it does make me think of home, and what that means. Because I won't be able to see a lot of friends--my cool pals in Colorado, for one, because there's a giant Texas to cross (it's big, y'all...). I'll miss seeing friends in Atlanta, Chicago, San Francisco, Seattle--you get the idea. The cool part about the nomad life and the internetz is how quickly you make friends all over, but it's hard to catch up with people in person. And I haven't even considered my many pals and family (!) across the border and pond.

This video made me think of home, and how you carry it with you, sort of. If I can get all philosophical here on your Monday...

How about you? Is there a home you miss, and/or friends you wish didn't live so far away?

I'm so excited about this month's release of Double Vision: Code Name 711...! Those fans who've been patiently waiting since they read the first book can finally read Linc's next adventure.

And I'm hitting the road to tell everyone all about how cool Linc is. For Fall, I'm mostly roaming around the South, but in April/May, I'll be in the Washington, D.C. area, where Code Name 711 is set. If you want me to come visit your school or venue, shoot me an email!

Hope to see you there!

For those of you not in my neck of the woods, stick around for the Code Name 711 blog tour! There will be interviews, reviews, and giveaways.

Stay tuned, more news on that in the next few days...