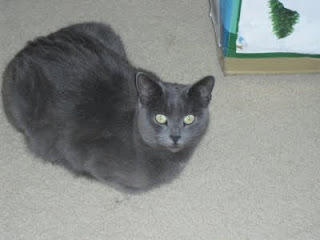 My good writer pal Jenny blogged yesterday about process, and how she's still figuring it out. I'm kind of with her in that respect. I thought I had it all figured out when I got ready to write DOUBLE VISION: I would drop the kids off at school, and then I'd write in the morning, and deal with random domestic nonsense in the afternoon. Simple, no?

Well, no. As it turned out, selling your house, dealing with all the stuff that comes with that, preparing to move--it's time consuming and brain zapping. Even when I would carve out a few hours to write, Lincoln Baker wouldn't show up for some reason.

So I tried getting up at 4:30, before Life is up, and before my brain is taken over by domestic nonsense. And it worked! I'd easily write 2,000 words before the rest of the house was even up, which was a sweet deal. Okay, so I ended up a little sleep-deprived, but it was worth it. And my cat Xena (see pic) kept me company, which made the whole early morning session even better. I still don't know why it's so much easier to write at that early hour (maybe because Lincoln Baker (my main character) is in Paris, and it's eight hours later there?), but it worked like magic. So that was an interesting lesson learned about my process.

Email ThisBlogThis!Share to TwitterShare to FacebookShare to Pinterest
Labels: Blogging About My Cats Even When It's Against The Rules, For Writers